Keeping a defective bull or ram can be a costly business. Over the last 12 months we have tested 240 bulls, of which:

Without fertility testing it can be very difficult to identify an infertile bull, particularly on farms where several bulls are kept and there is no accurate recording of which animals have been running with which bull at what time but finding a sub-fertile bull or ram can be even more of a challenge.

A sub-fertile bull or ram will get some animals pregnant, but it will take several services and therefore more time. As most people calve their animals only in the spring or the autumn, the consequence of a sub-fertile bull is more empty females at the end of the breeding season. A sub-fertile bull will also lead to a spread out calving pattern. This is not only a nuisance, as pregnant animals need to be checked longer (which has an impact on labour costs), but it will also lead to a variation in the age of the calves, which will have an impact on calf health. Calf scour pathogens, for instance, need time to build up. Therefore, calf scour is normally a problem at the end of the calving season, but the longer the calving season, the worse the problems. A variation in calf ages can also result in an increased risk of pneumonia as older calves carry and spread pathogens to which they are immune to younger and more susceptible animals.

We use an electro-ejaculator to test bulls’ semen. It is a sophisticated version of the one we use to test rams with. Unlike the old ram probe, the new electro-ejaculator stimulates more accurately the internal male sex glands and has less effect on the nerves of the hind legs. We have a special ram probe as well so we can also test rams with it. As bulls can be tested in a crush, it is a very safe (for human and animal), quick and easy way to test a bull’s fertility.

Our progressive beef suckler clients routinely test their bulls . We have seen a range of abnormalities: scrotal hernia, testicular deformation, small testicles, “broken penis” and, of course, reduced ability to mate due to lameness. The semen showed: contamination with urine and pus(!), deformed sperm cells (a wide variation), but the most common abnormality of semen was poor motility, ie: less than 30% of sperm cells with a forward progression. Most, if not all, bulls are re-tested before a negative advice was given.

We would recommend whether they be dairy sweeper bulls or beef stock bulls that a routine annual bull fertility check is very beneficial, before they are set to work in the herds. Most farms spend a lot of time and money checking their cows’ fertility, so why not also pay attention to their bulls’ fertility, which is equally vital?

An often forgotten, but vital component of all flocks are the rams. If undetected, an infertile or sub-fertile ram can have a significant effect on lambing percentages and overall flock profitability. We would therefore recommend that all rams, but particularly new additions to the flock are examined at least 2 months prior to tupping, to ensure that they are fit for purpose. This gives enough time for replacements to be sought if any rams are found to be inadequate.

The fertility of a ram can be relatively reliably assessed by physical examination alone. Fertility examination includes gross examination of the testicles (including measurement of scrotal circumference), scrotum and penis. The rams are also checked to ensure they have no lameness or other abnormalities or disease that would affect their ability to service the ewes. At Endell’s we have the equipment to perform electro ejaculation for semen collection. This can be used to further assess any ram found to have abnormalities on gross examination. Semen is examined for volume, colour and consistency as well as for the motility of the sperm and any microscopic abnormalities. 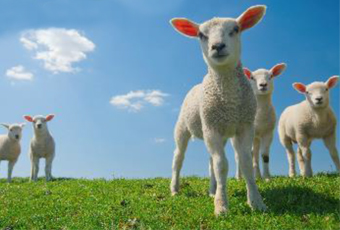